The stretch-blow process is used to manufacture plastic containers which generally are lighter in weight and have greater clarity and improved physical Properties，compared to containers manufactured by other blow-molding Processes. In stretch-blow molding, the container material is biaxially ented by stretching and blowing the parisons at a critical temperature, which is different for each of the materials commonly used PET, also PETP), PVC, and PP. The parisons, after being formed, are temperature condtioned，stretched longitudinally up to twice their original length by mechanical means, and then blown in a blow mold to the container shape. Stretch-blow machines and molds are more complex and more costly than those used in other blow-molding processes and, as a consequence, the stretch-blow process tends to be limited to high-volume production.

The machines commercially available vary in the means used to form, temperature-condition, stretch, and move the parisons from station to station in the machine, some of which are shown below.

Single Stage Machine. In a single-stage machine, all of the steps involved in producing a fully formed, biaxially oriented container occur in continuous sequence in a single machine.

In one kind of machine, the parisons are precision-formed in a fashion similar to the injection-blow process. After the parisons have cooled to a point at or below the temperature at which orientation occurs, they are removed from the parison tooling and transferred to a conditioning station where they are heated and/or allowed to equilibrate to their critical orientation temperature. The parisons then are moved to the blow station, where they are held by the neck finish, stretched mechanically by rods inserted into the open necks, and immediately blown to the shape of the container. In one type of machine, the sequence of operations occurs in a rotary fashion, and in another type the operations are carried out in linear movements. Such single-stage machines are being used to produce clear, light-weight PET containers in a size range of 1/2 to 2 liters for packaging carbonated beverages.

Another kind of single-stage machine is similar to a continuous-extrusion shuttle machine except that a preform station and mold have been interposed between the parison extruding and blowing stations. This type of machine is used primarily to produce containers from PVC or other heat-sensitive materials, in a size range of V3 to 2 liters.

Two-Stage Machine. In two-stage processing, parisons are formed in a first-stage machine which is normally off-line from the second-stage machine where the containers are blown. Parisons are formed either by injection molding，using specially designed runnerless molds, or by extrusion molding in a fashion similar to pipe extrusion. Injection-molded parisons are precise by nature with fully formed necks, whereas extruded parisons are essentially short pieces of pipe which require secondary forming at both ends. The fact that parison forming is independent from parison blowing allows for the possibility of molding parisons in one location and transporting them to another location for blowing. 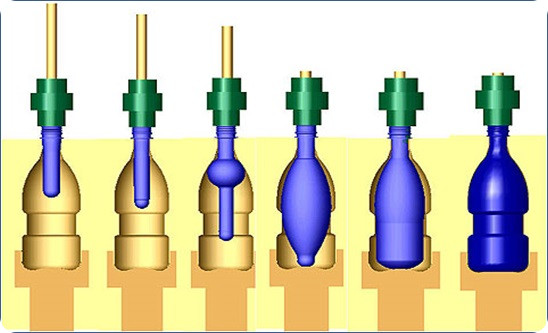 In one kind of second-stage machine, which uses extruded parisons, the heated parisons are transferred from the heat chamber to the blow station, where one end of the parison is reformed by neck rings which close around it, and by a core (swage) which compression-forms the neck finish; the other end of the parison is gripped by a picker which mechanically stretches it to a length sufficient for the blow-mold halves to close around it and pinch the end shut. This type of machine is being used to produce relatively clear PP containers in a size range of 4 to 48 ounces for packaging sterile medical solutions, household chemicals, and food products.

In another version of the second-stage machine, which uses injection molded parisons, the parisons are restrained at one end by a bead at the base of the neck finish, stretched mechanically by rods inserted into the open necks，and then immediately blown to the shape of the container. This version of the second-stage machine is widely used to produce clear, light-weight PET containers in a size range of 1/2 to 2 liters for packaging carbonated beverages.